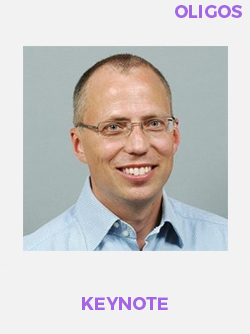 Professor of organic chemistry in the Department of Physics, Chemistry and Pharmacy at the University of Southern Denmark. Co-inventor of LNA.

Jesper Wengel is Professor of organic chemistry in the Department of Physics, Chemistry and Pharmacy at the University of Southern Denmark.  He earned his doctorate at Odense University.  Prof. Wengel has authored over 360 research papers in peer-reviewed scientific journals, and he serves on the editorial board of the journal Nucleic Acids Therapeutics.  He is the inventor or co-inventor on more than 20 patents and patent applications, and he is the co-inventor of LNA (Locked Nucleic Acid) and UNA (Unlocked Nucleic Acid) technologies.  LNA and UNA technologies have both entered clinical trials and have found diagnostic and biotechnological applications.  Some of Prof. Wengel’s numerous awards include being elected as a member of the following: the Royal Danish Academy of Sciences and Letters, the Danish Academy of Natural Sciences, and the Danish Academy of Technical Sciences.