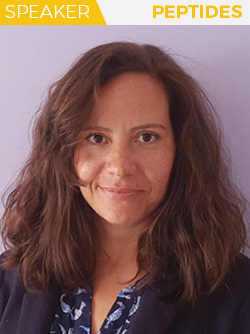 Silvia Marchesan obtained her PhD at The University of Edinburgh (2008, UK), and qualified as Pharmaceutical Chemist (2007, UK) and Pharmacist (2006, Italy), honorary researcher at UCL (2005-2007), Academy of Finland Fellow at University of Helsinki (2008-2010), CRSS Fellow jointly at Monash University and CSIRO (Australia, 2010-2012). In 2013 she moved to the University of Trieste where she opened the Superstructures Lab (www.marchesanlab.com) thanks to a competitive starting grant. In 2018 she became Associate Professor and received the Habilitation as Full Professor. Since 2021 she is Visiting Professor at the University of Cambridge (UK). Recent awards: RSC Soft Matter Lectureship (UK, 2021), Howard Lecture (UK, 2020), Aulin-Erdtman Lecture (Sweden, 2019), Nature Chemistry’s selection among international profiles charting chemistry’s future (2019), Rising Star in the natural sciences (Nature, 2018).