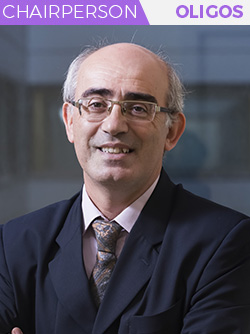 He was group leader and director of DNA synthesis core facility at European Molecular Biology Laboratory (EMBL), Heidelberg (Germany) 1994-1999. He is research professor at CSIC, Barcelona from 2000 until now. He was the Director of the Institute for Advanced Chemistry of Catalonia (IQAC) from 2012 to 2017. His group is a member of the CIBER-BBN Networking Centre on Bioengineering, Biomaterials and Nanomedicine.

He is coauthor of more than 400 publications and several patents on the synthesis and properties of nucleic acids derivatives. Research efforts have been concentrated in the following areas:
1) Development of novel RNA derivatives to enhance specific gene silencing properties of siRNA by RNA interference, including nuclease resistant siRNAs, lipid-RNA and development of lipid formulation for siRNA transfection.
2) Conformational analysis of biologically relevant non-canonical DNA structures such as G-quadruplex, and i-motif.
3) Development of biosensors using clamp oligonucleotides for enhanced binding by triple helix formation.
4) Functionalization of DNA origami to enhance biomedical properties.
5) Synthesis and properties of oligonucleotides carrying non-natural nucleobases for the study of mutagenesis, DNA repair, and DNA methylase inhibition.
6) Synthesis of oligonucleotide-peptide and protein conjugates.