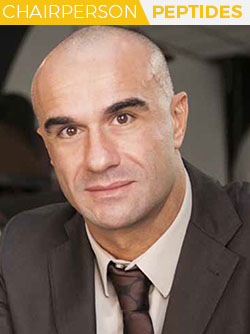 Pierangelo Metrangolo (Lecce, 16 April 1972) is full professor of chemistry at the Politecnico di Milano since 2011. Since 2010 he also holds a part-time position as research professor of molecular recognition at the VTT-Technical Research Centre of Finland and from 2015 he is visiting professor at the Centre of Excellence in Molecular Engineering of Biosynthetic Hybrid Materials of the Aalto University, Finland. He has been EU Fellow at the University of Toulouse (France, 2001), visiting Professor at the University of York (UK, 2005) and at the University of Jyväskylä (FI, 2006). His awards include the 2005 ‘‘G. Ciamician’’ medal of the Division of Organic Chemistry of the Italian Chemical Society, the 2005 Journals Grant Award of the Royal Society of Chemistry, the 2009 IUPAC Young Chemist Award, and the Fluorous Technologies Award 2019. He is Editor-in-Chief of CrystEngComm (RSC), Co-Editor of Acta Crystallogr. B (IUCr), and member of the Editorial Advisory Board of Cryst. Growth Des. (ACS). He is author of 244 publications with 15663 citations (h-index: 58; ISI-WoS Core Collection 25-06-2019) and holds 4 patents. He is currently Titular Member of the Physical and Biophysical Chemistry Division of the IUPAC (2018-2019) and elected Vice-President for the biennium 2020-2021. Since 2013 he is the holder of an European Research Council (ERC-StG2012) grant to carry with the project “FOLDHALO – Folding with Halogen Bonding”, aimed at investigating the relevance of halogen bonding in biological systems.
His research interests include crystal engineering, fluorine chemistry, supramolecular, and biomimetic materials. In particular he focuses on the study of the self-assembly properties of halocarbons and their interactions with biomolecules for applications in the fields of functional materials and nanomedicine.