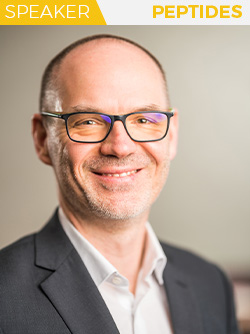 Olivier Ludemann-Hombourger is the Global Director Innovation & Technology of PolyPeptide. He received his PhD in 2001 from “Institut National PolyTechnique de Lorraine” in France, in collaboration with Novasep Process, for which he was leading the R&D activity over 10 years. He worked during three years for Lonza in Braine l’Alleud (Belgium) as head of Operations, before joining PolyPeptide as General Manager of the French entity for 7 years, until taking his current global position in 2019.