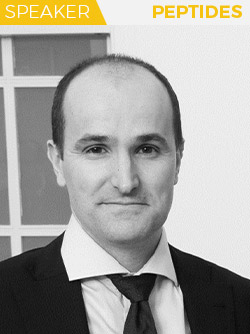 Marc Vendrell graduated in Chemistry at the University of Barcelona in 2007. He then joined the Singapore Bioimaging Consortium to work in synthetic fluorophores for optical imaging. In 2012 he started his independent career as an Academic Fellow at the University of Edinburgh to develop and translate fluorescent peptide probes for imaging immune cells in humans. His research has lead to several license agreements with industry to commercialise chemical probes worldwide (Trp-BODIPY, ApoTracker Green, SCOTfluors) and been recognised with international awards and distinctions:  SEQT Young Investigator Award (2007), SBIC Chairman's Prize (2010), ERC Consolidator Grant (2017), Fellow of the Royal Society of Chemistry (2017), Marcial Moreno Lectureship (2018) and SRUK Emerging Talent Award (2019). Since 2020, he is appointed as Chair of Translational Chemistry and Biomedical Imaging at the College of Medicine in Edinburgh.