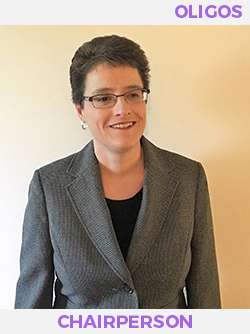 Scientific Advisory Board of Chemistry Today

Dr. Ackley spent over 15 years working in contract manufacturing organizations (CMO) serving the pharmaceutical industry. Nearly all of that time was spent working in the area of oligonucleotides. She joined the German CMO Girindus in 2001 where she held a variety of positions of increasing responsibility including QC Manager, Director of Operations, and Vice President of Business Development and Project Management. She joined Nitto Denko Avecia (NDA) in 2013 after its acquisition of Girindus’ US facility. NDA is the world leader in the contract manufacturing of oligonucleotide medicines. She was a Senior Director of Operations and then the Vice President of Development overseeing the process development and analytical development teams at all NDA locations. She has worked on a broad range of compounds including small molecules, radio pharmaceuticals, and oligonucleotides. She is a past member of the scientific advisory board of the US TIDES conference and is currently on the scientific advisory board of Chimica Oggi- Chemistry Today. She stopped working full time in 2016 to spend more time with her family. She remained with NDA on a part-time basis in the role of Scientific Advisor until 2018. Dr. Ackley earned her doctorate in analytical chemistry from the University of Cincinnati.