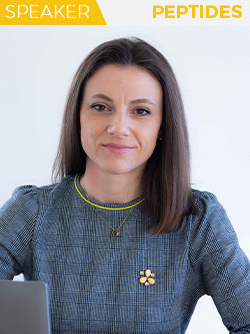 Fides Benfatti studied Chemistry at the University of Bologna in Italy, where she obtained her Master degree in 2004. The same year, she started in Bologna her PhD in the field of Medicinal Chemistry, focusing on the design and synthesis non-peptidic integrin ligands. After obtaining her PhD in 2008, Fides approached the field of asymmetric catalysis, under the supervision of Professor P.G. Cozzi. In 2010, she moved to EPFL Lausanne as a recipient of a Marie Curie fellowship, joining the group of Professor J. Waser. During two years, Fides studied the development of new catalytic methods for the synthesis of heterocycles.

In 2012, she joined Syngenta Crop Protection in Switzerland as Team Leader in Research Chemistry, working in the Insect and Disease Control indications. Since 2016, Fides is Senior Team Leader and Head of insect control Lead Generation and in 2020 she was appointed Head of Computational Chemical Design and Modelling.