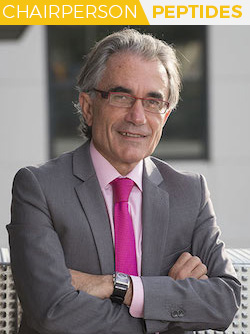 Fernando Albericio is Research Professor at the University of KwaZulu-Natal (South Africa), Full Professor at the University of Barcelona (Spain), and Visiting Professor at the King Saud University (Saud Arabia). His major research interests cover practically all methodological aspects of peptide synthesis, as well as synthesis of peptides and small molecules with therapeutic activities, mainly in the field of cancer and infectious diseases. His group also is being involved in the development of new strategies for drug delivery. He has published over 900 scientific paper and co-authored four books. He has filled more than 55 patents. He is Editor in Chief of several scientific journal and acting in the Editorial Board of several others. He has been honored with a Doctorate Honoris Causa by the Universidad de Buenos Aires (Argentina), the Leonidas Zervas award by the European Peptide Society, the Vincent du Vigneaud award by the American Peptide Society, among others. During the last years, part of his efforts has been focused to make the peptide synthesis greener and better.