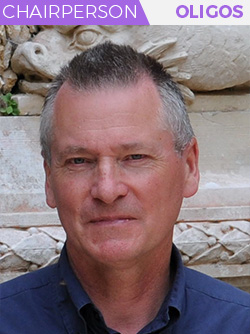 Brian Sproat obtained his D. Phil. from Oxford University in 1978. His career in the oligonucleotide field began in 1981 in Mike Gait’s group at the MRC Laboratory of Molecular Biology, Cambridge, UK. Following this he ran a research group at the EMBL, Heidelberg, Germany (1984-1994) where he developed several new RNA analogues with broad applications in molecular biology and also managed the oligonucleotide synthesis core facility. Subsequently he moved into the biotech industry and became General Manager of Innovir GmbH, Göttingen, Germany (1994-1999), a company developing hammerhead ribozyme-based therapeutics and in October 2000 he moved to Leuven, Belgium to become CSO of RNA-Tec, which subsequently became Integrated DNA Technologies, BVBA. Since January 2010 he is Managing Director of Chemconsilium GCV, Belgium and provides consultancy services for pharma/biotech companies on all aspects of oligonucleotide chemistry including synthesis, purification, analysis, scale-up, bioconjugation, labelling & CMC. During his career he has published more than 100 scientific articles, has authored/co-authored 13 book chapters and is inventor/coinventor on several patent families.