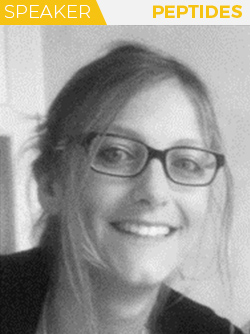 Anaïs F. M. Noisier is an Associate Principal Scientist in the Research and Early Development Cardiovascular, Renal and Metabolism (CVRM)| BioPharmaceuticals R&D departement at AstraZeneca, Sweden. Anaïs obtained her PhD in 2013 under the guidance of Prof. Margaret A. Brimble at the University of Auckland, New Zealand. She then worked as a Marie Skłodowska-Curie postdoctoral fellow at the Institute for Research in Biomedicine (IRB Barcelona), Spain, in the group of Prof. Fernando Albericio. In 2016, Anaïs joined AstraZeneca as a post-doctoral fellow. Since 2018, she is a peptide expert in the New Modalities team. Her expertise includes the synthesis and medicinal chemistry of therapeutic peptides, as well as the development of peptide-conjugates for targeted delivery. She is notably particularly interested in the development of new methodologies for the Late-Stage Functionalization (LSF) of peptides.