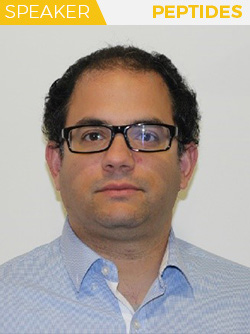 Head of Research and Director

Amit’s studies at the Hebrew University of Jerusalem in Israel (HUJI) began with a B.Sc. in Biology, followed by an M.Sc. in Human Genetics, when Amit decided to make drug discovery his research focus. Amit joined Professor Amiram Goldbum’s team at the HUJI Institute for Drug Research for his Ph.D., concurrent with an M.B.A. degree, specializing in finance. This combination made Amit realize that methodologies utilized under conditions of high uncertainty in finance, can be implemented in virtual screening which suffers from imperfect “scoring” functions. This was the basis for the establishment of Pepticom, a software company which utilizes “reward” functions derived from finance coupled with genetic algorithm optimized reinforcement learning. Amit believes that overcoming the shortcomings of virtual screening is the only feasible way to overcome the large and ever-expanding peptide chemical space.