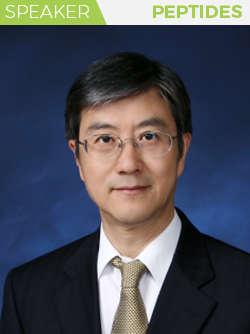 Prof. Lee has received B. S. degree from Seoul National University (1974), and PhD from Rutgers University in organic chemistry (Prof R.A. Moss, 1981). He worked as a Post Doc. in the Department of Chemistry at the University of Chicago (Prof E.T. Kaiser, 1981-82). He has been a Professor at School of Chemical & Biological Engineering, SNU (1982-2017), and currently Professor Emeritus of the same department. He was a visiting professor at Dept of Chemistry, University of Arizona (Prof Victor Hruby 1991), Protein Research Institute, Osaka University (Prof Saburo Aimoto, 2002), and the Max Mousseron Institute of Biomolecules (IBMM), University of Montpellier 1 (Prof Jean Martinez, 2011). He has served as the president of the Korean Society of Industrial & Engineering Chemistry (2011), the president of Korean Peptide and Protein Society (2010-11), and the president of the Korean Union of Chemical Science and Technology Societies (2013).
Prof. Lee’s work at SNU has been mainly focused on peptides design and synthesis, esp., anti-aging and whitening cosmeceutical peptides, Tyrosine-Rich Peptides (TRPs) for self-assembly, and developed various kinds of polymer supports for solid-phase peptide synthesis (SPPS) and polymer supported catalysts for organic synthesis. He has also been involved in developing nanoparticle sensors, especially, surface-enhanced Raman scattering (SERS) nano tags and probes, for peptide library synthesis and multiplex detection of biomarkers in vitro, in vivo, and ex vivo. He has published more than 250 peer-review papers and 80 patents. He served as an organizing chairman for the 3rd Asia Pacific International Peptide Symposium (2009, Nov. 8-11, Cheju, Korea), and received Cathay Award at the 14th Chinese Peptide Symposium (2016). Currently, he has taken a position at Bead Tech Inc. as a chairman & CEO.