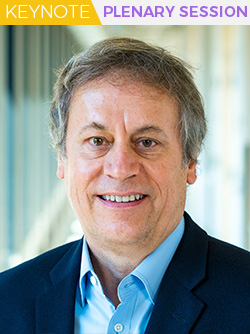 Ron Raines is the Firmenich Professor of Chemistry at the Massachusetts Institute of Technology and an Associate Member of the Broad Institute of MIT and Harvard. He has contributed broadly to our understanding of the chemistry and biology of peptides and proteins. He revealed that unappreciated forces—the n-to-pi* interaction and C5 hydrogen bond—stabilize all proteins; created hyperstable and human-scale synthetic collagens; discovered an RNA-cleaving enzyme that is in a multi-site human clinical trial as an anti-cancer agent; and developed processes to synthesize proteins, catalyze their folding, and facilitate their entry into human cells.

Ron received Sc.B. degrees in chemistry and biology from MIT, and A.M. and Ph.D. degrees in chemistry from Harvard University. He was a Helen Hay Whitney postdoctoral fellow at the University of California, San Francisco. He joined the faculty at the University of Wisconsin–Madison in 1989, was a Visiting Associate at Caltech in 2009, and returned to MIT in 2017. His awards include the Max Bergmann Medal from the Max Bergmann Society, Ralph F. Hirschmann Award from the American Chemical Society, Jeremy Knowles Award from the Royal Society of Chemistry, Vincent du Vigneaud Award and Rao Makineni Lectureship from the American Peptide Society, Emil Thomas Kaiser Award from the Protein Society, and a Humboldt Research Award from the Alexander von Humboldt Foundation.