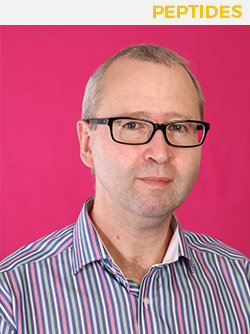 Michael is a Biologist by training, with a PhD in Neuroscience from the University of London School of Pharmacy, studying electrical activity in Neurons related to epilepsy. After increasing responsibilities as a postdoc and a productive year working in GSK, he joined Pfizer UK as a team leader in assay development in pre-clinical drug discovery. This experience ultimately allowed Michael to enjoy a brief stint in Singapore, where he successfully introduced electrophysiology and functional imaging techniques at an institutional level in the field of Dermatology. Michael joined Bachem in 2013, and is currently responsible for overseeing Bachem’s peptide business in the UK. Among his contributions are regular public presentations, as well as bringing on board biological assay release testing for peptide API.