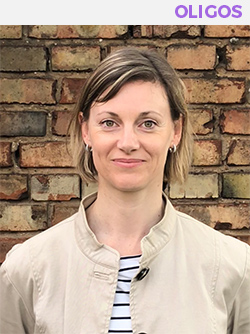 Belinda Cowling (PhD) is Chief Scientific Officer at Dynacure, France. Her research has focused on the in vivo investigation of the normal role of proteins in skeletal muscle, the pathological mechanisms that occur during muscle disease, and identifying novel therapeutic targets for myopathies.

She completed her PhD at Monash University, Australia, where she identified a novel regulator of skeletal muscle mass and strength, which is implicated in human disease and therapy (2004-2007). She completed a postdoc at the IGBMC, France where she studied the normal biological function of dynamin 2, which is mutated in centronuclear myopathy, as well as the pathological mechanisms leading to disease (2008-2014). In 2014 she became a tenured researcher for Inserm, where she identified down regulation of this gene as a novel therapeutic target for centronuclear myopathies. In 2016 Belinda cofounded Dynacure, where the lead program is focused on modulating the expression of dynamin 2 with antisense oligonucleotides for the treatment of centronuclear myopathies. She is coauthor on 5 filled patents and 28 peer reviewed scientific articles.