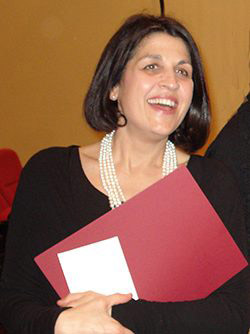 Bioorganic chemist expert in peptide and protein chemistry and biology

Anna Maria Papini is a bioorganic chemist expert in peptide and protein chemistry and biology. She completed an International PhD in bioorganic chemistry in 1990, under the supervision of Prof. Luis Moroder of the Max Planck Institut fuer Biochemie. In 1991 she founded the first Laboratory of peptide chemistry at the University of Florence starting peptide-based translational research. She is Professor of bioorganic chemistry of the Italian and French Universities and she is Laureate of the “Chaire d’Excellence” 2009-2014 of the French “Agence Nationale de la Recherche” (unique in chemistry out of 16). In recognition of her outstanding contribution to peptide science in 2008 she was the recipient of the Leonidas Zervas Award of the European Peptide Society and of the 1st Dimitrios Theodoropoulos Memorial Award of the Hellenic Peptide Society. In 2008 she started the French-Italian Interdepartmental Laboratory of Peptide & Protein Chemistry & Biology (www.peptlab.eu) that she coordinates, associating the Departments of Chemistry, Neurosciences & Pharmaceutical Sciences of the University of Florence and the Laboratory of Chemical Biology of the Université Paris-Seine – UMR CNRS/UPSud/UPSaclay 8076 BioCIS – Biomolécules : Conception, Isolement et Synthèse. Since 2013 she founded and is the director of the platform PeptLab@UCP of the Université Paris-Seine, with the mission to support SMEs involved in peptide-based projects. For the period 2011-2020, she has been nominated Treasurer and Member of the Executive Committee of The European Peptide Society. In 2015 she was one of the founders of the Italian Peptide Society and since 2017 she has been member of the scientific committee. Since 2013 she is Coordinator of the International Affairs and Erasmus Program of the School of Sciences of the University of Florence. She has been elected vice-chair of the 2014 Gordon Research Conference on Chemistry and Biology of Peptides, Edition “Peptide Science in the Era of Synthetic Biology" and co-chair with Phil E. Dawson of the 2016 Edition “Crossing Barriers by Peptide Science for Health and Wellness”. She has been nominated Chair of 14th International Peptide Symposium – 37th European Peptide Symposium that will be held in Florence (Italy) on August 28-September 2, 2022. She is cofounder of the spin-off companies of the University of Florence EspiKem Srl launched in 2003 and Apotech in 2016, since 2017 founder and scientific coordinator of PeptFarm “Laboratorio congiunto Università di Firenze – Impresa” joining PeptLab and Fabbrica Italiana Sintetici, F.I.S. Italy to develop large-scale synthesis of peptide-drugs, and of the start-up Toscana Biomarkers Srl (2007-2014), whose mission was R&D of peptide-based diagnostics of autoimmune diseases. For that she got in 2009 the Frost & Sullivan Excellence in Research Award in the European autoimmune disease diagnostics market & the Vespucci Award of the Regione Toscana for the perspectives of development of the company aimed to research and production of innovative diagnostic methodologies for autoimmune diseases, i.e., multiple sclerosis and rheumatoid arthritis. She is author of 251 peer-reviewed articles: 143 articles in peer reviewed scientific journals and 108 articles in peer reviewed books. She is coauthor of 10 filed patents. She has been invited to present 116 lectures in International Symposia, Universities and Research Centers. 52 oral & 242 poster communications were selected for presentations in international symposia. Moreover she was invited to present 10 lectures aimed to technology transfer in the global space of R&D (2 in extra-European countries and 8 in Europe).